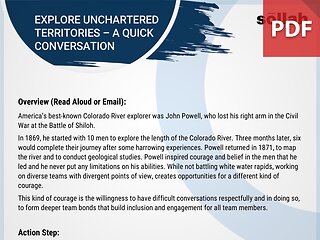 America’s best-known Colorado River explorer was John Powell, who lost his right arm in the Civil War at the Battle of Shiloh. In 1869, he started with 10 men to explore the length of the Colorado River. Three months later, six would complete their journey after some harrowing experiences. Powell returned in 1871, to map the river and to conduct geological studies. Powell inspired courage and belief in the men that he led and he never put any limitations on his abilities. While not battling white water rapids, working on diverse teams with divergent points of view, creates opportunities for a different kind of courage.

Need a quick solution to tackling tough workplace conversations? This one-page resource provides a topical overview/story (to be read to your team in person  - as a huddle - or sent via email). An action step and discussion questions provide the framework for a customizable conversation. Easy-to-implement and designed to be used with little to no planning, these conversation triggers provide a simple model for creating great team discussion.